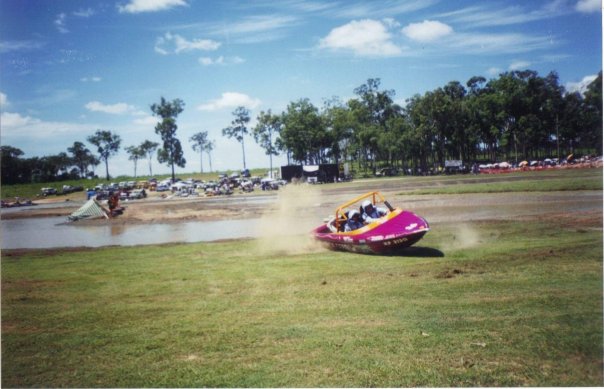 There was a time where I was involved with motor sport and that was Jetsprint boat racing as family were all part of the whole thing especially as being on the actual boats. The boat racing is really all about beating other boats by being timed when running through a specific course on a man made track where water can be at least knee deep if not less. The boats all have jets on the back and are powerful. I don’t mean the rocket pack jets, but for propulsion through water without propellers on the outside. I do love the names of some of the boats like Kart Attack, Agrovation, Island Style, Major Attitude and Boys Toys. There were people there from all walks of life including those who had built boats for fun from home and proved you did not need huge amounts of money to build them and some laughed at one person for his shopping bag of parts, but I am pretty sure the same guy beat them out on the track.

Mum and my sister were navigators for the drivers who we are still good friends with even though we have not been part of the sport for quite some time. At a later stage dad was a pit marshal who kept everything running in the pits and making sure all the boats were in the water on time for their race. The main track we were all part of was the one in Cabarita on the Tweed Coast. I was around there somewhere either watching from the hill and after a while when family were in the pit area that was where I was. It was a very busy area and loud when the boats started up, but it was really good to meet up with people who you had seen before. I did get signatures from a few of the people and I think it was good as I was included with many of the people although I was shy. I think this period in time during the 90s could have helped me to open up and enjoy myself a bit more. That and living in a caravan park could as well.

I loved being in the pit area and there were times at the Cabarita race meetings where I would help out like collecting donations at lunch time for entry to the pit area for people to have a look at the boats and it was usually a big day too. Over the years we all became part of the organising of the race events and I was helping somewhere with them as I ended up helping to sell raffle tickets for the winner to have a lap in one of the boats. At one event I had to sell tshirts and race programs and was actually left on my own or I was actually forgotten about. I think forgotten is the right word as I had no choice, but to go along with the whole thing. Another even I had people really happy with me being at the entry gates to let people in as I was directing them down to me like a seasoned pro to get their money and the tickets though I didn’t spend too long there was I think I went elsewhere. I cant quite remember, but I did like going as I would be busy doing something. There were several occasions where I was asked to be on the safety crew on the side of the track where we would push the boat back into the water once it came out though you had to be very aware of what was going on around you as the boat could end up heading towards you on land and at great speed.

Cabarita was not the only event that we attended as we did travel some distances to other locations in Australia. There were some that were at the same time of the year so you would know what to expect. They were different parts of Australia too. I think one event in Albury down on the border of NSW and Victoria was where we ended up taking a trip to Canberra on the way home and then Sydney too. There do seem to be a few tracks around the country especially during the mid-1990s. There were several tracks in NSW I went to and one was Griffith that had an event over every Easter weekend and we could camp out at the track too. One time I tried to get into the track cheaper, but got caught out as I was after a stamp as it was meant to be for alcohol and not the entry. I did not like to use the communal amenities they had and didn’t actually use them as I do not like to do the group thing as it is a little creepy. We would usually meet up with some friends on the Central Coast before heading out west as a group. This was not the only area where we could stay on the premises as Manilla near Tamworth you could do the same and many of the people on the boats stayed there too. It was actually like a big family affair where people just got together.

I did seem to find some areas to be long drives though I was only in the car going for a ride instead of being the driver since I was not old enough and the days before iPods and those sorts of things. I did miss out on visiting some places too especially the opportunity of going down to Mildura though I have been told I was not missing out on much. It was funny as we had a galah that we took with us up to Mackay and while there was a large amount of noise from the boats he actually went to sleep, but did not go far from any of us at all. There were several times along with Mackay that we ended up at a closer track that was near Harvey Bay and located in Maryborough. We did usually stay in a motel in that area and it was loads of fun though there were times when some of the people would drink large amounts and race along the rooves of the motel though then there were the antics with teasing a kiwi with a blown up sheep. Not me though, but one of the drivers. On the trip up to Mackay one of the boats we were following had a flat, but the first we knew of it was the sparks flying on the road. They soon replaced the wheel.

It was good times getting to know people and being at barbies to help out too. It was a great part of life as I don’t think many people would appreciate the work that occurred behind the scenes to set events like that up as people just turn up. There is usually loads more that happens especially working bees for people to mow the grass and to fix other things up. I am glad that I got to experience all and to be given the opportunity to do things that I would never have had to do before. Much of the event locations were not covered so that did become annoying when there was very little shade and I did eventually become bored especially when I found I didn’t have to be out there so early and could ride my pushbike from Hastings Point out to the track that was several kms up the road. I did have rides in the boat though it was only really ion practice days when we had them and not at the actual race days though I don’t think I could be fast enough to navigate a boat and would get them horribly lost and maybe on an island or two. The whole place was really noisy with boats being put in the water and the announcer talking over the top of the boat noise and that of people within the pit area too though I did help out some people in the boats as I was meant to be pit crew, but I think I did more watching than anything else. The highlights of some of the events was that you could stand in certain spots and get wet from the boat spray as it went around the track.

The races still do occur in Australia and in Cabarita though I have not been to one race since around 2001 if not before. Still it was loads of fun when I was there and I did love one part of the whole thing and that were the crashes. Not that the camera I had was any good, but I bet todays cameras do capture really good action shots. It is not a large part of what I have ever really spoken about though it could be one huge chunk of my life that people have not known about.